Learn about how we're keeping our customers and staff safe during COVID-19. We're here when you need us.

The Junkluggers of Charlotte 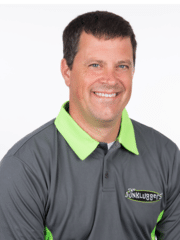 On October 1st of 2019, Ryan became the new owner of The Junkluggers of Charlotte, and he couldn't be more excited about the positive impact his new venture has on his community and the environment. With Ryan's proven success as a franchisee, the community of Charlotte is getting an experienced business owner who cares about his customers and is inspired to work towards The Junkluggers mission of keeping all reusable items out of landfills by the year 2025.

Ryan Barclay grew up in Scottsdale, Pennsylvania and attended Alleghany College, where he received his Bachelors degree in Economics. He spent ten years in the banking industry specializing in capital markets risk management before leaving corporate life to become a small business owner.

In 2007, Ryan purchased his first Meineke Car Care Center franchise and, with the cash flow from that one store, went on to invest in an additional three locations, each of which had been struggling financially. During his eleven years of ownership, Ryan's business acumen was instrumental in turning these shops around, and he attracted the persistent interest of another dealer in town who wanted to expand his territory. In 2018, Ryan sold his Meineke franchises and took some time off to spend with his wife, Sarah and two young children, before deciding to join The Junkluggers family.

Ryan is active in his local church and loves being outdoors--mountain biking, swimming, waterskiing and pretty much anything that involves playing with his three and five year old boys and their dog!

Back to Previous Page Back to Meet The Team

We serve the following areas